Fantastic Review for Behind Every Cloud!

I've just read a review for Behind Every Cloud, written by Top 2 Bottom Reviews. Makes my long hours sitting in front of a computer all worth it. It's nice to know I sometimes get it right.

Review:
I’ve read several books by Penny Brandon and I’ve enjoyed them all. Her writing is a good mixture of lightness and angst, which balances out her stories and makes them highly addictive to read. The blurb does an excellent job at describing the story, so I won’t rehash a lot of it. Instead, I thought I’d talk about why I liked this book and why I recommend it.
When the book begins, I mistakenly thought that one of our heroes, Kurt, was going to be a jerk. He’s a successful businessman and has been a serial dater for the past couple of years. But as the story progressed, I began to quickly see that I was incorrect about my assumption of him. Kurt loves his sister and when their parents died, he raised her during most of her teenage years. Feeling very responsible for her and hoping to help her get past the pain and loss of losing their parents at such a young age, Kurt makes a selfless/foolish promise to her, and because of it, has been denying his sexuality and his attraction to other men. What I really liked about Kurt is: although he is a workaholic, he’s a genuinely nice guy. He’s kind, protective, and intelligent and often puts others before himself. He was one of those characters where I really wanted the “nice guy to finish first”.
There is also more to Sasha than meets the eye. When they first meet, Kurt literally saves him (you’ll have to read what he saves him from) and he’s a bit of a mystery. But we quickly find out that Sasha has reputation as a party-goer as well as being a player. He’s made some very bad decisions, and because of who is parents are, Sasha has been in the gossip magazines and spotlight for some time. When Sasha realizes that Kurt doesn’t recognize him, he feels like he actually has a chance of having someone actually like him for who he is, and not his rich, spoiled bad-boy image. Sasha ended up being a likeable, sexy man who was definitely meant to be with Kurt.
I liked that Kurt and Sasha brought out the best in each other. Sasha is able to be himself around Kurt and think of someone else other than just himself and Kurt actually begins to relax a little and put his own needs first. I thought they were very well matched and I enjoyed watching them get to know each other and truly fall in love. Plus, the sexual chemistry between these two men. Whew! The sex between them practically heated up my e-reader it was so hot!!
The reason why this is not a five star read for me was: I thought the ending was a little abrupt. Now don’t get me wrong, it has a very happy ending, I just thought the conflict between the characters was wrapped up a little too quickly. But having said this, I still loved the book and highly enjoyed reading every minute of it.
If you’re looking for a well-written romance with plenty of sizzling sex and a love between two sexy men, then Behind Every Cloud is definitely a book to consider. I’m looking forward to reading more by Ms. Brandon in the future, and hope one day, she’ll revisit these characters again.
Highly Recommended!
Reviewed By: Gabbi


Thanks Gabbi. I definitely have more in mind for Kurt and Sasha!
Posted by Penny Brandon at 8:27 PM No comments:

Behind Every Cloud is on the ARE best sellers list!

I've just been notified that Behind Every Cloud is on the All Romance E-books best sellers list! I'm doing a little dance. Click on the word link to get to their page. 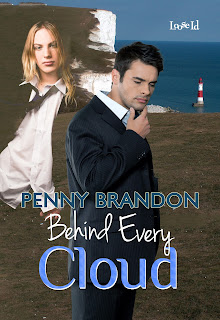 Throwing himself with abandon into the Sydney gay scene, millionaire Sasha Harrison becomes playboy celebrity known to everyone as “Silver.” It was fun at first, but after five years of being the media's meal ticket he now just wants to be left alone. Hounded by reporters, he hides out with Kurt, the one guy who has no idea who he is, or was. But that's the problem. Kurt doesn't realize Sasha's not used to being turned down, and Sasha's not used to being with nice guys.
You can read an excerpt on the Loose-id site. Click here for the link.
Posted by Penny Brandon at 5:04 AM No comments: