REVIEW:
From the moment Brenn saw the man’s reflection in the looking glass, he knew that it was the man he was destined to love forever.  From the moment Brenn heard Joey’s laugh, from across the pub, he knew Joey was the man he wanted to love forever.  All he has to do now is convince Joey of the same thing.  It isn’t going to be too hard, though.  They are meant for each other.
Except Joey isn’t the man Brenn thinks he is.  Well…not for much longer.  He is dying and he probably won’t even last another month.  So no matter how ‘destined’ them might be, it is a destiny bound to end in heartache.  Still…Joey can’t help but be selfish in this one last thing.  Three weeks with Brenn’s smile, and body, and love–Joey thinks three weeks could feel like forever in Brenn’s hands.  And after that…well, he tries not to think about ‘after’ any more.
Sometime is hurts learning just how short ‘ever-after’ really is.
Ok, I am, right now, declaring a moratorium on all sad books.  I have spent the last three days crying my eyes out, and I am running out of Kleenex, dammit!  I don’t know where everyone is hiding all the fluffy stories, but I demand one be delivered to me, on the hour, or someone is going to pay.  Look, I know a story about a guy who only has three weeks to live is going to be sad…but this just wasn’t fair.  I am emotionally damaged already. My angst levels have hit critical, and I have been sniffling at the most ridiculous things in the last 24hrs.  I just need something to make the pain go away…
…what’s that, you say? You are going to let them go at it like bunnies for almost the entire story?  Well…you might (might) be forgiven.
In all seriousness, I have been waiting for this sequel for a really long time.  I honestly didn’t think it was ever going to be written.  And I am thrilled that it was.  It is not the deepest story ever written, and yeah, healing thru the power of cock isn’t my favorite trope, but I enjoyed this story.  It did not slack off on the seriousness of Joey’s problems, but it did a good job of not making it all that Joey was.
Joey was strong, and stubborn, and so freaking brave.  But he was also scared.  Not that he was going to die, really, but that he was going to die and hurt this man that loved him.  So he tried not to love him–thinking stupidly, that if it was only one-sided, then somehow Brenn wouldn’t hurt quite so badly.  This made me want to shake him…but also try and wrap him up in all the blankets.
And while the whole sex thing was a bit too much here (for a dying guy, Joey sure does have the stamina of a teenager), I did enjoy reading it.  It was hot, while still taking into account that Joey couldn’t really do sex the ‘normal’ way.  The amount of time spent in naked-fun-time was a bit excessive, but it was also real enough that it helped the story (most of the time) instead of taking away from it.
By the end, when they are at the hospital and Brenn is holding Joey, I was a soggy ball of tears.  The resolution wasn’t exactly how I would have pictured it–and perversely I kinda wanted it to go the other way (even it would have scarred me for life)–but it did make all that pain worth it.
This was a good story, and I liked it as much as I did the first book, Choices.  Though if you haven’t read the first book, don’t worry, this one can be read as a standalone with no problem.  I do want Simon to finally get his man, though.  Poor dude needs to get laid, fall in love, and go somewhere when the furniture doesn’t predict the future (or if it does, get one that can give him the winning lotto numbers, or something (does Australia even have a lotto?)).
RATING: 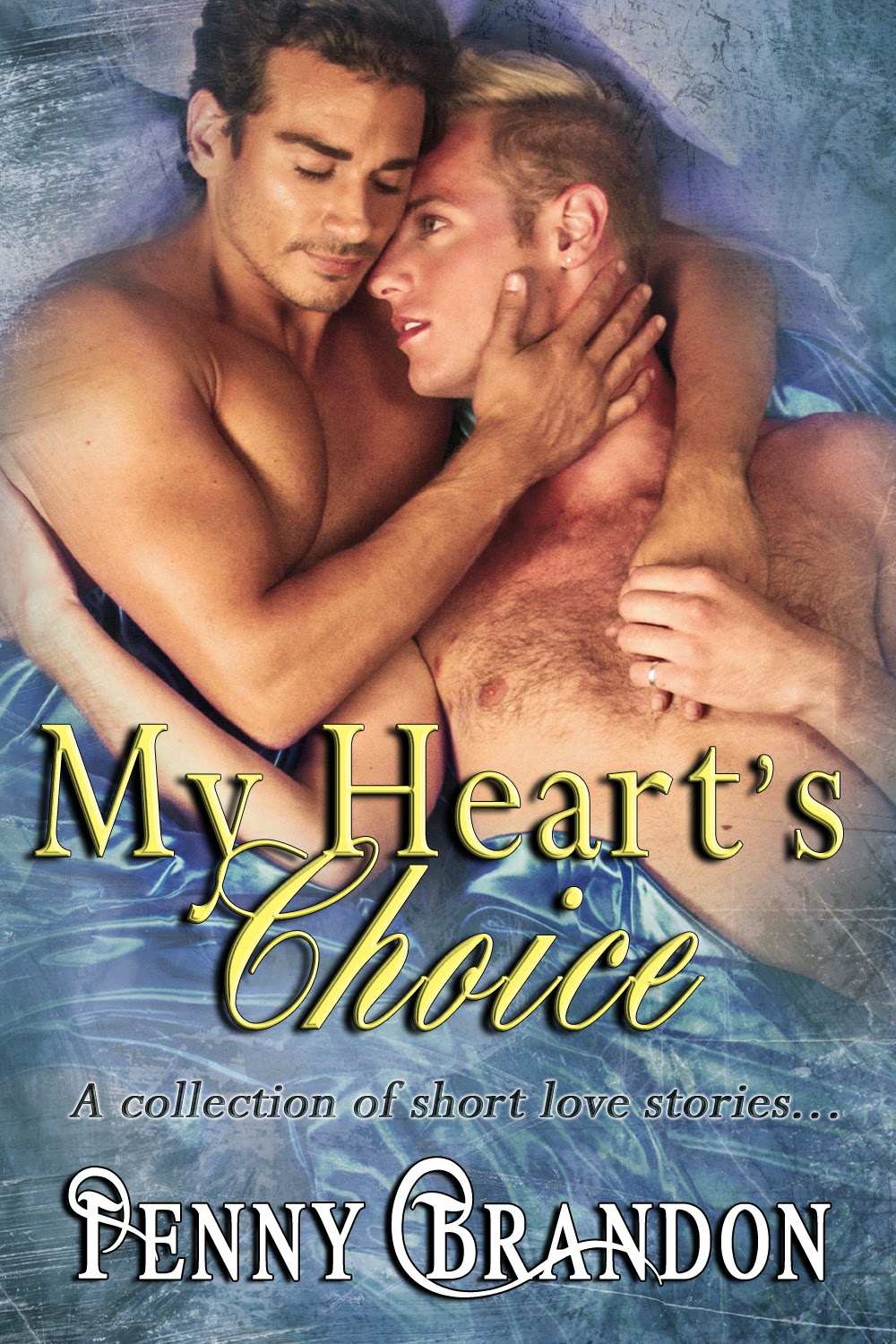 This is the new cover for my short stories that are FREE to read. I'm updating the old covers. I hope you like it. It was done by the lovely Jess Buffet
Posted by Penny Brandon at 1:29 PM 2 comments: