Murphy's Law: what can go wrong will go wrong,  is something everyone has suffered at one time in their life, or if they haven't yet, they're going to. It's bad luck, or it's fated. Either way, you'll know it when it's happened to you, and for most people it's a shrug of the shoulders, for some it's a nightmare. For David, it's a way of life.

Fed up of trying to fly under his step family's radar, David sets off to Australia to get away from their constant harassment. Maybe there he can be himself, be free, be with someone who can help him forget about his problems for a while. Meeting Scott, who not only thinks he's sexy but shows him how much over and over again, is perfect. And Scott doesn't care that he's accident prone. Well, David is everything prone; what can go wrong does. And falling in love with someone he nearly kills is about as wrong as it can get.
Scott likes his sex uncomplicated, preferably with someone just passing through, but his family want him to settle down with some nice young man. To get away from their meddling he heads to Bondi Beach. That's where he meets David, a man who just pushes his buttons, and the fact that he's looking for the same thing Scott is, makes him ideal. However, he falls in love with David--sassy attitude, accidents, and adorable accent included. But how is Scott going to persuade David to stay with him, especially as David's seriously upset about nearly getting him killed?
Publisher's Note: This book contains explicit sexual situations, graphic language, and material that some readers may find objectionable: male/male sexual practices.

To read an excerpt click here.
Posted by Penny Brandon at 7:17 PM 2 comments:

I've just got the cover art for Murphy's Law: Guess who's who? 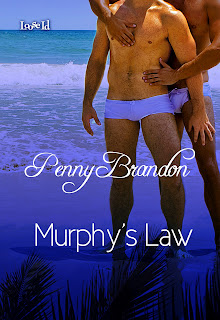 Here's a hint. David is from England, Scott is an Aussie.
Posted by Penny Brandon at 7:45 PM No comments:

Bringing Him Home is going into PRINT!

Bringing Him Home is going into PRINT! You can pre-order over at Amazon. It's only $10.99, so go and order a copy now. Yes, in PRINT! 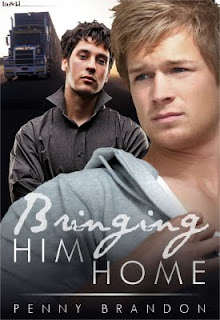 Jared Hall was a soon to be ex truck driver who had given up on ever finding true happiness. What he wanted wasn’t out there so what was the point in looking? And even if by some fluke he could find a man to love, how the hell was he supposed to bring him home?


Kyle Swanson had no particular place to be. He’d given up his old life; living in the fast lane no longer appealed. But being alone was not all it was cracked up to be, either. So he was looking to find someone, looking to find love, looking for a place to call home.

When these two men meet the sexual tension is so hot they can't help but want to explore it further, but when Kyle finds out where Jared lives, that's where it all goes wrong. 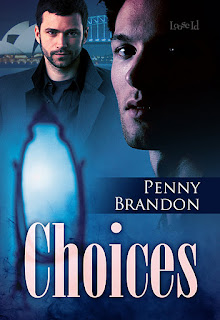 By
"Sassy"
This review was from Amazon
I loved this book. It's a wonderful twist on fairy tales and happily thereafter and not because of the two male characters.

It has an intriguing premise: You have a mate or soulmate but you have to soothe them, groom them, convince them. This is not one of those paranormal books where you look at someone and BAM soulmate . . . or you smell someone and because you're a wolf BAM soulmate. This book mirrors, IMHO, real life. Relationships take work and commitment. Even if you know who your soulmate is, there is no telling it will be easy and quick. This is what this book shows so wonderfully well.

The main character Marc is a well-written and easy to love character. He looks in the mirror and learns his soul mate is a man. Marc thinks he's not gay but hasn't really clicked with females, especially sexually. Marc has to choose: pursue or not to pursue.

The pursuit is wonderful. I also loved Liam, the guy who is pursued. Liam doesn't know he wants to be pursued and perhaps needs to be pursued so he resists. Resistance is futile! LOL

I loved the strength in Marc. He wants this relationship but he is not a weak, beggy type of character. He's strong and confident as he pursues Liam. He doesn't back down. He knows what he wants and doesn't hesitate in letting Liam know. I like that there were two strong male characters.

There are two other strong characters in the book, but this book is all about these two men. They are both wonderfully written.

So far this is one of my favorite books. I will read it again. I'll follow this author.

It's beautiful and well written. I've read many books and many I hate how much I paid for them after I finish reading this. This one? Well worth the price.
Posted by Penny Brandon at 12:39 PM No comments:

Choices has been reviewed by Dark Divas Reviews

This is what Lasha from Dark Divas Reviews has said about Choices:
Lasha’s Review:

Choices takes a distinctive turn on the Gay For You trope. In it, Marc who always thought he was straight looks into a magical mirror and sees the face of his one true love: Liam. Scared for all of one minute about his soon-to-be change in sexuality, Marc decides to hunt down Liam and see if they are compatible. And boy are they! However, there’s one big problem that must be addressed before Marc can have his happy ending. He has to convince Liam — who only wants Marc for sex — that true love can really exist.
Normally, the straight guy is magically converted to being gay is not a big turn on for me because it seems so unrealistic. But in Choices, the thing that sells the novel’s plot for me is Marc. His characterization is so honest, so unwavering in the fact that he loves Liam and they can overcome anything, that as the reader you start to believe it too. Plus, the chemistry between Marc and Liam… No wonder Marc is so ready to turn gay for Liam. Can we say hot?
Overall, Penny Brandon’s novella is a satisfying read. For readers of the GFY plot-line, you will find a unique twist to that trope that makes Choices a delight. Plus it looks like there will be a sequel as the magic mirror has more couples to get together. So I am definitely looking forward to more in this universe.
Rated 4 Delightful Divas by Lasha!

Posted by Penny Brandon at 4:33 PM No comments:

Choices is out today!

Choices has been released today! To buy click on the picture, or go to Loose-Id. To read an excerpt, click here. It's only $5.99! The first in a series, I hope you like the premise of the story. I would love to hear any comments.