His Heart's Desire (The Looking Glass #3) 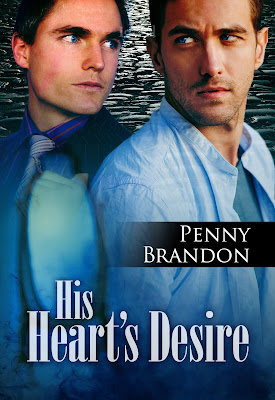 Blurb: As the keeper of a magic mirror that shows those lucky few their one true love, Simon dreams of the day it will show him his. He never dreamed it would be a punk-assed kid with ripped jeans and rainbow-colored hair. Devastated, Simon tries to push Alex away, refusing to tell him they were fated, but Alex keeps coming back, showing all the signs of a man drawn to his soulmate. Realizing he’s made a terrible mistake, Simon figures the only way to fix it is to be the man Alex wants because Alex is the man Simon needs if he’s ever to have a future.

Never before has Alex fallen so hard for a man who obviously doesn’t like him, but Alex is sure there’s a passionate man beneath Simon’s prickly exterior. Peeling away Simon’s layers is like ripping off a bandage, but it’s worth it when Alex finally has Simon in his arms. The problem is, though he may have Simon’s body, he doesn’t have his heart, and that’s the part Alex wants most. Until he finds out Simon has lied to him.


Excerpt: When his glasses slipped down his nose for the umpteenth time, Simon cursed. He hung his head and took his glasses off, dropping them onto his desk before he succumbed to frustration and threw them across the floor. His concentration was shot and trying to make sense of the numbers in front of him was proving impossible.

He wasn’t going to get them to add up, and conceding that point, Simon pushed away from his desk and straightened his shoulders. Tension pulled at his muscles, but he was grateful to feel the ache because it was something tangible, something he could focus on, which marginally lessened the numbness filling his mind.

He glanced toward the door, shuddering slightly at the thought of someone walking in. He’d almost left it locked that morning, not having the energy or the forbearance to face anybody, but being the mirror’s keeper meant he had to be there for those who were lucky enough or worthy enough to be shown an image in the mirror; those obviously deemed more worthy than him. Simon hadn’t felt undeserving though.

In fact, when the mirror had chosen him to take over from the previous keeper, Simon had believed it was because he was special. Over the years he’d served the mirror with integrity, and he’d never regretted it, until yesterday. Still, he’d made a promise, so he opened as normal, regardless that his insides felt they were being torn into tiny confetti-like pieces.

Deciding to try to work on the figures tomorrow, Simon shoved the paperwork into a drawer, releasing a sigh as he did so. There was about an hour before closing, and without anything else to do, he picked up a tin of polish and a soft cloth and strolled to the back of the shop.

He’d always found the manual labor of dusting and cleaning therapeutic. He also loved to see the beautiful antiques gleam as they would have done when first crafted by expert hands. It had taken some time to learn the value of each piece and to build the collection that now covered nearly every inch of floor space. Being the mirror’s keeper was his primary vocation, but he also had to run the store, keeping it profitable so he didn’t starve. He’d succeeded, far better than he would have believed that day he’d first walked through the front door, and that pride kept him from neglecting the finely constructed furniture, despite wondering how long it was still going to be his.

He’d never thought he’d be the custodian this long, if truth be told. He’d expected to be shown his soul mate after a year or two and then hand everything over to the next keeper. Love, that was the key. Find love, find freedom, but Simon doubted he’d find love now, and as a result he could end up being here until the day he died.

It was just as Simon had finished with a circa 1720s’ Queen Anne dressing table that he heard the small bell above the front door tinkle, announcing the arrival of a customer. Simon groaned, wishing he’d had the balls to leave the closed sign facing outward. Why now? Why couldn’t he have gone one day without having to pretend to be polite to someone? Sighing, he replaced the lid on the tin of polish, gently putting it down before making his way to the front of the shop.

Halfway there he staggered to a halt, grasping the edge of a console as he recognized the person who’d walked in. Disbelief coiled in Simon’s chest while his heart started frantically trying to burst through his rib cage.

Thrown, Simon schooled his features. “Alex? What are you doing here?”

Alex’s bright smile slowly died as he stopped a few feet away. “Nice to see you too.”

“I’m serious. Why did you come back?” Simon didn’t mean to sound as shocked as he felt, but seeing Alex after believing he’d never do so again caused disturbing butterflies in his stomach.

“To find out if you were all right. I was worried about you.” Alex leaned against a large walnut table, casualness oozing from every line of his body. Or it seemed that way until Simon saw the narrowness of Alex’s eyes and the frown between his brows.

“You don’t need to be worried. I’m fine.” Simon continued toward the front of the shop, overly conscious of Alex following him. Had the mirror drawn Alex here again? Was it trying to force them together? That wasn’t going to work, despite Alex no longer looking like some grunge band member. Except for the hair. It was still dyed every color of the rainbow.

Without thinking about it, Simon switched over the sign on the door and then engaged the lock. He turned, leaning against the cool glass, concern pinching his mouth even though he tried not to show it. What if Alex wouldn’t leave him alone? But what if Alex did, what then?

That piercing sense of loss Simon had experienced yesterday came back in full force. He gasped, shaken. How could he fear losing Alex when they weren’t right for each other? The mirror had got it wrong. It had to have. Yet that pain stayed in the middle of Simon’s chest, forcing him to consider why it was there.

“You don’t look it. In fact you look worse than you did yesterday.” Alex moved to within a couple of feet. Way too close for Simon’s comfort, but he wasn’t going to say anything in case Alex figured Simon found him disturbing. A stark blue gaze settled on Simon’s, scrutinizing, assessing. Simon tried to stare back, but with the couple of inches in height difference, he decided Alex’s mouth was easier to look at.

“Have you eaten?” Alex’s low question came as a surprise, both for its content and the odd, sexy way he said it.

Simon shook his head, though he wasn’t answering the question, more refuting the way Alex seemed able to disorient him.

“Then how about I take you out to dinner?”

Dinner? For one heartbeat, Simon imagined a darkly lit restaurant, soft music, and fine food—a dream he’d held for years. But in that dream, Simon would be gazing into his soul mate’s eyes while knowing that he was needed, that he was someone’s strength, someone’s hope. Not the other way around.

Alex cocked an eyebrow, his dismay genuine. “Too soon?”

“No. I mean, I don’t go out.” The second Simon uttered those words he knew he’d made a mistake. Alex didn’t need to know how Simon lived, nor did Alex need a reason to poke at Simon’s resolve.

Because he wasn’t allowed. However, Simon couldn’t very well explain that to Alex, not without explaining the mirror and the role as its keeper.

“I’m agoraphobic,” Simon said, wincing at the lie but unable to think of anything else that might sound plausible. He fidgeted, just wanting Alex to go, to forget about him, to find someone else to love. Wouldn’t that be better for both of them, even if it hurt? Simon absently rubbed at the biting ache in his chest but then straightened his shoulders, determined not to give in to the faithless mirror that had caused it.

Simon merely nodded, unwilling to voice the lie again in case Alex figured it for what it was.

“Then what about takeout? Or I could rustle up something in your kitchen while you go and have a shower.”

Wanting to scream, literally, Simon bit his lip instead. What was it going to take to get rid of Alex? Was the man being deliberately obtuse or was he just that dumb? Or was the mirror’s magic that powerful? Frustrated, Simon sucked in a steadying breath, praying for strength or guidance, only to see Alex’s eyes darken. Simon watched, fascinated, caught up in those amazingly gorgeous blue eyes. He hesitated, suddenly confused. “You’re not cooking for me,” he stated.

“Then I’ll order in. What do you like? Chinese, Italian, Mexican, Thai?” Alex smiled as if he’d just won a battle. It wasn’t exactly smug, more like delighted, and Simon realized his second mistake. Alex wasn’t dumb, and he wasn’t going to be put off easily.

Before Simon could say anything, however, Alex pulled out his mobile phone and then started tapping on the screen. Simon ignored the impulse to watch. He’d never owned one of the new smart phones as he didn’t have anyone to call outside the antique shop’s circle of buyers and sellers, and for that he used the landline.

“Well? What would you like?” Alex held his phone up. Simon glanced at it. The screen showed what looked like a list of different restaurants. Assuming Alex intended to pick from one, Simon shook his head.

“Wow. You don’t compromise much, do you?”

Compromise? From the moment he’d been old enough to understand what the damn word meant, all Simon had done was compromise. How could he be expected to keep offering more? He’d forfeited over ten years of his life as the mirror’s keeper, and for what? To continue putting his own wants aside and settle for the wants of others? To lose his dream in order to give someone theirs?

“Couldn’t you try? Look, if you let me do this, I’ll stop worrying.”

Simon was just about to say no again when he considered Alex’s proposal. If he let Alex buy dinner this once, then Alex would no longer bother him. “Chinese,” Simon said, annoyed that he was giving in when he’d been determined not to. He just hoped he wasn’t going to regret it.

“Chinese it is.” A slight twist of Alex’s lips snagged Simon’s attention. Alex had full, well-shaped lips, turned up at the edges so even when he wasn’t smiling it seemed like he was. Simon didn’t mean to stare, but it was difficult not to. Those lips looked soft, moist, and seriously kissable.